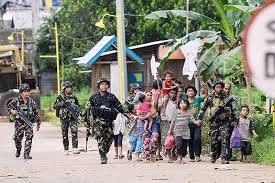 In May 2017 the centre of Marawi City was taken over by Islamic Freedom Fighters (BIFF) who pledged allegiance to the Islamic State of Iran and Syria (ISIS).

This started a six month battle before the Armed Forces of the Philippines (AFP) could take back the city and defeat the rebels.

During this time over 84 thousand families were displaced.

Disaster Aid Australia and Balay Mindanaw, our local partner immediately responded to the crisis situation by assisting in the supply of safe water with Skyhydrants and also providing tents and tarpaulins in the displaced persons camps.

Disaster Aid Australia Directors David Langworthy and Brian Ashworth were able to visit Marawi earlier this year to see how the reconstruction efforts were proceeding.

During the visit the Directors, and Balay Mindanaw representatives, were briefed by the Commander of the Bangon Marawi Task Force who are responsible for reconstruction of the city and bringing the residents back to their home city. 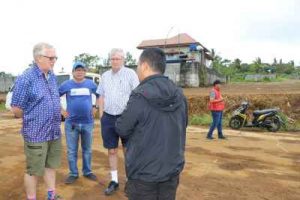 The briefing included an inspection of a site being prepared for a camp to enable citizens to relocate from the initial resettlement camps many kilometers from Marawi to a location close to the city.

Over 200 Disaster Aid tents have now been erected on the site together with a SkyHydrant to supply safe drinking water.

This camp is an important step in getting people back to living close to the their place of work.

TO HELP US DELIVER HUMANITARIAN AID