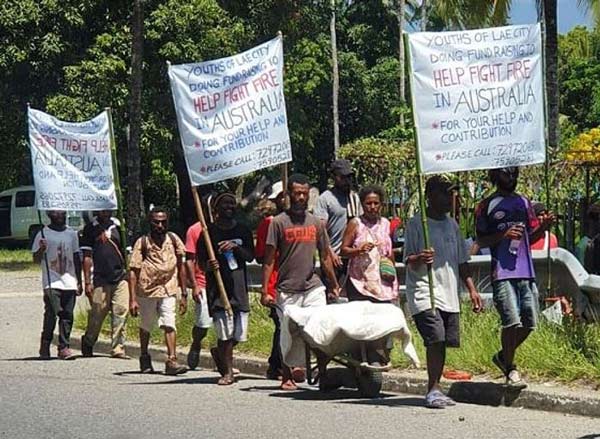 Papua New Guinea is a poor country compared to Australia with an average per capita weekly income equivalent to $64 AUD.

Even so they raised $61,000 from the city and surrounding area.

The collection was started by Lae local, Sheila Harou, who was inspired to take action after seeing news reports from Australia.

“We called out to all our Morobeans to be united in one heart, to give from the heart to console our neighbour,” she said.

The money was given to the Merimbula Rotary Club, which gave $50,000 to the Bega Valley Council Community Disaster Relief Fund.

The Rotary Club spent the $11,000 on two trailers for BlazeAid, a volunteer-based organisation that repairs fences that were lost in the fires in rural communities.

What a great story about our neighbours helping Australia.

Thanks to the ABC for the photographs, and you can see more at the following link: ABC

TO HELP US DELIVER HUMANITARIAN AID